by Tania Griffis | For the House, Genius Ideas, Hacks & Tips

Use those recycled towels around the house to clean up or use during art projects- Don’t throw them away! Check out some more of these genius ideas when you are stuck on what to do with your old towels!

Have you ever stopped to think about how many towels you may have around the house? Or, about how often you go through towels and toss out your old towels? 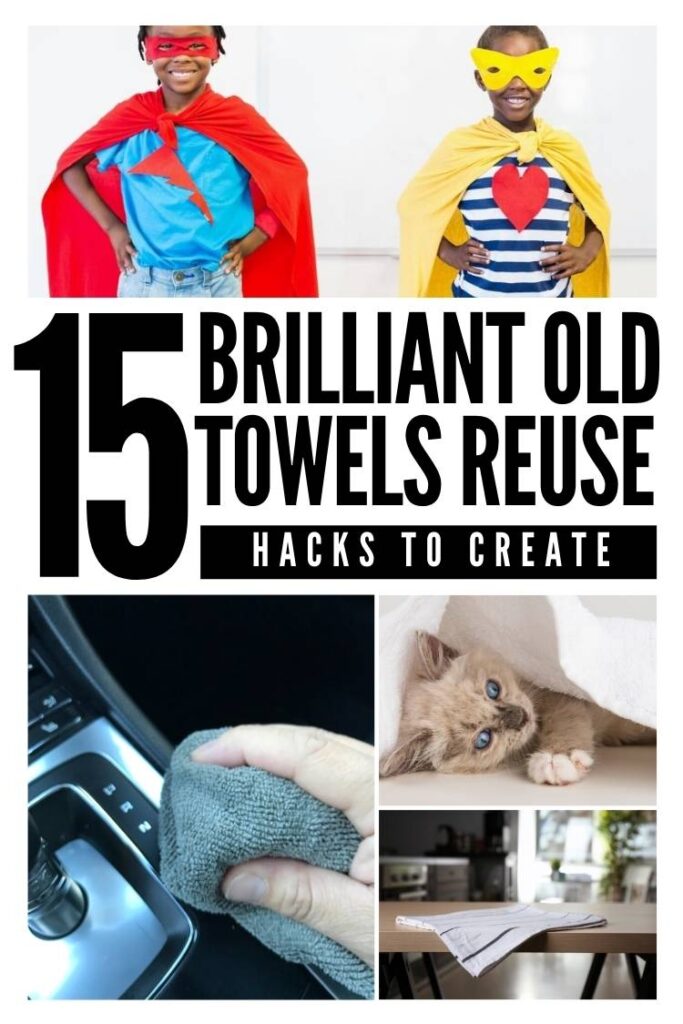 Seriously! When you have a family, it’s amazing how many towels there seem to be. Bath towels, pool towels, hand towels, kitchen towels… even washcloths!  And, every so often those towels get rips in them or start fraying and it’s time to replace those old towels. What else is there to do with old towels besides throwing them away (or giving them away)? PLENTY!

I love coming up with ideas for repurposing and reusing old items that are about to be thrown away! Recycled towels are just one example. If you’re like me, you will see the beauty in these ideas to reuse old towels stuffed in your cabinets.

15 Brilliant Ways to Use Recycled Towels Around the Home

For the longest time, old towels got tossed in a bin that sat on the back porch. When we needed something to clean up a spill or even change the car oil, we recycled towels as clean-up rags. It was a great way to use them and not have to worry about the mess as we just tossed them out once we were done.

But, then I started thinking about how we could utilize those old towels even more, and I began to search for more genius ways to use them.

If you’re wondering what to do with old towels, check out these brilliant ideas DIY old towel ideas to upcycle your towels!

1. Use recycled towels as Cleaning Rags

I mentioned earlier about using old towels to clean up spills and then throw them away, and that still happens! Old towels are the BEST for cleaning up a spill, leak, or dealing with paint and other messes because you aren’t worried about messing them up.

Besides, have you seen how much a pack of shop towels costs? Save the money by recycling your old towels as cleaning rags – they last a long time!

2. DIY Blanket made from used towels

Take old towels that are in generally good condition and sew them together creating a large blanket. It is great for kids playing fort, bedding for animals, and even adding a backing to it and make into a quilt.

You could also use this for a picnic blanket outside, or to make a supersized beach towel!

3. Cut and use recycled towels as Bibs & Burp Cloths

If you have a baby, you KNOW how many bibs and burp cloths you go through in just one day. Buying those items new is super expensive!

Instead, save money with this DIY old towel idea. Cut and hem the sides of old towels and use them as bibs or burp cloths. The terrycloth texture is perfect because its soft yet durable enough for cleaning up any messes your baby makes! 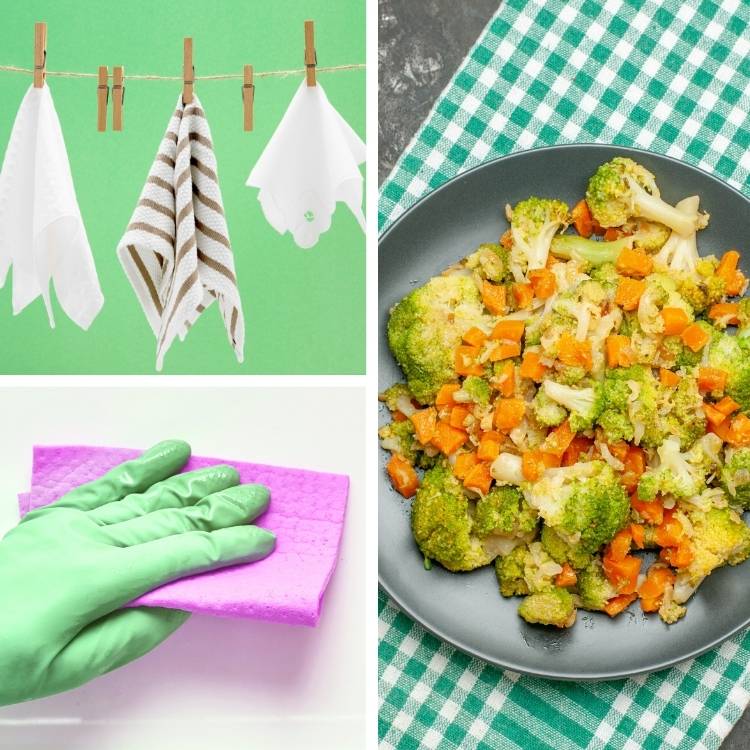 4. Use recycled towels as Washcloths

If you sew, take your old towels that are in reasonably good condition and cut them down to make new washcloths out of them. Take this one step further by creating a soap pouch with your old towels.

Pro Towel Recycling tip: Be sure to add stitching around the edges to keep your recycled towels from fraying.

With a little sewing know-how, you can recycle old towels into a kid’s pool robe. If you need a little guidance on how to do that, take a look at this tutorial from Sew Mama Sew! For an even easier alternative, you can create a towel wrap instead. Simply sew a button to one end of a towel and open a small hole where it wraps around you to pull the button through. That’s it! Now you can relax in your towel or on the beach without worrying that your towel will fall off!

6. Create your own Hooded Towel

With just some basic sewing skills, turn your old towels into a hooded towel for your baby or toddler. Kids love them (I speak from experience here), but they are pretty expensive.

Make your own for way less money – and the extra thickness will soak up more water and keep your toddler warmer, too. 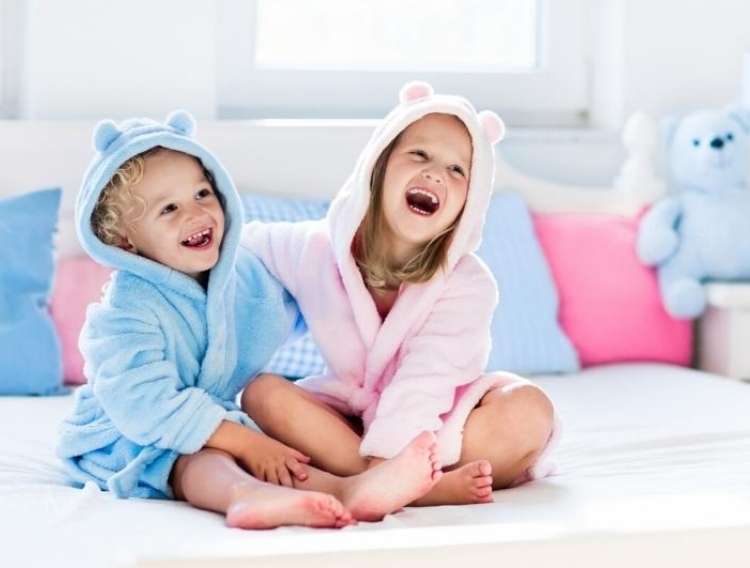 7. Use recycled towels as Dish Towels

Old bath towels soak up a LOT of water. If you have some that basically still look pretty good, cut them down to dish towel size and hem the edges. Instant dish towels that will soak up more than many dish towels you buy.

Reuse old towels by donating them to an animal shelter. They can use them for giving baths to pets, using in crates, and more. I know this isn’t using them around your home, but technically, an animal shelter is a (temporary) home! This is a great alternative to donating your used towels to a store.

If you have a steam mop, use old towels to cut to size to use to clean your floors instead of buying pricey pads. This is a clever idea from Baby to Boomer that will save you a lot of money over time.

Strip quilted dish mats are something I have only recently learned about. This is a great tutorial from The Crafting Chicks that you can use to learn to make your own. The backing is created from Rollie Pollie mats sewn together to the towel. This is a super easy and fun project and makes a great gift.

I love the prints they have on these mats!

Want to do art or cooking with kids? Check out this no-sew apron made from towels idea from Red Ted Art. This is a great way to take a towel that might have a stain or two and give it a new purpose. Aprons are meant to get dirty, so go for it!

Once I had finished my apron, I realised, that it was the same size as a tea towel – which means a) you can make it even easier and simpler (as you can use the already hemmed edges) and b) you can recycle and old tea towel or buy a cheap set of tea towels to use!

12. Use old towels as Packing Material

When you are moving or shipping boxes, sometimes, you need to pad breakable items so they don’t get broken in transit.

This is a perfect job for recycled towels! Wrap your breakables in them and use them to pad the sides of the box or fill in gaps. Old t-shirts could work for this, too.

13. Use old towels to create a bag to Store Plastic Sacks

Do you have an abundance of plastic sacks stuffed into a drawer in your home? Use an old towel and create a bag like this one from Craft Bits to store all those plastic sacks. This easy solution clears up the clutter of bags in a drawer, under the sink, in a cabinet, etc. All you need is an old tea towel, some elastic, some cord, and your sewing machine to get this handy shopping bag holder completed!

14. Add some ties to your towel and create a Super Hero Cape

Yes! Got kids? If so, at least one of them has probably taken a towel and transformed it into a superhero cape. Why not make it official?

It’s easy to upcycle an old towel into a superhero cape by adding ties to two of the corners and perhaps a colorful letter patch (or use markers for that part). It’s quick, cheap, and will provide hours upon hours of squeals and laughter.

15. Use old towels to Keep Cold Drafts Out

Roll up old towels and put them on the floor under your doors to keep cold winter drafts from coming inside the house. It costs you nothing to prevent the drafts and saves you money in heating costs. This old towel hack is a win-win!

See, old towels are insanely useful around the house for so many different things!

I hope you found this list helpful! Stop throwing away those old towels and put them to use with these creative DIY old towel ideas!

Tell us in the comments: Do you have other amazing ways to repurpose old towels? 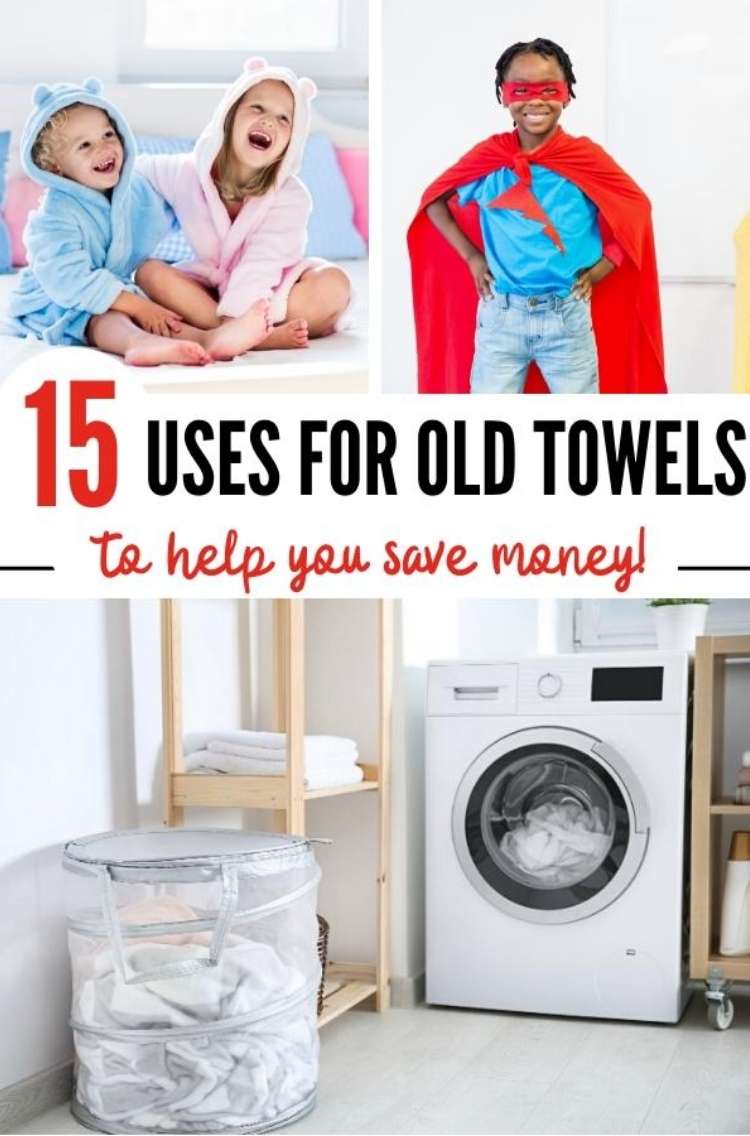 If you loved these ideas for how to recycle old towels

Check out these other ways to reuse common household items: