10 Silly Sayings to Replace “Trick or Treat” This Halloween

For as long as anyone can remember, children all over the world have been saying “trick or treat”. We all know the drill, right? Your little one gets dressed up in their favorite Halloween costume, grabs their bucket, heads out the door, and spends the next several hours repeating “trick or treat” over and over again, as mounds and mounds of candy get dumped into their Halloween bucket. It’s cute and all, but it’s been done. Why not change it up a little this year and instead try a few of these silly sayings to replace trick or treat? It’ll catch everyone off guard and bring a little fun to the Halloween evening as well!

In some neighborhoods, people actually don’t hand out any type of candy without a funny joke or riddle being told. If these silly sayings above aren’t quite working for you, try to think up a few jokes that your little ones can ask instead. Whatever you decide to do or say, be safe and have a fun spook-tacular halloween! Important to note, also ensure the safety of those you interact with, physical, emotional, and psychological. 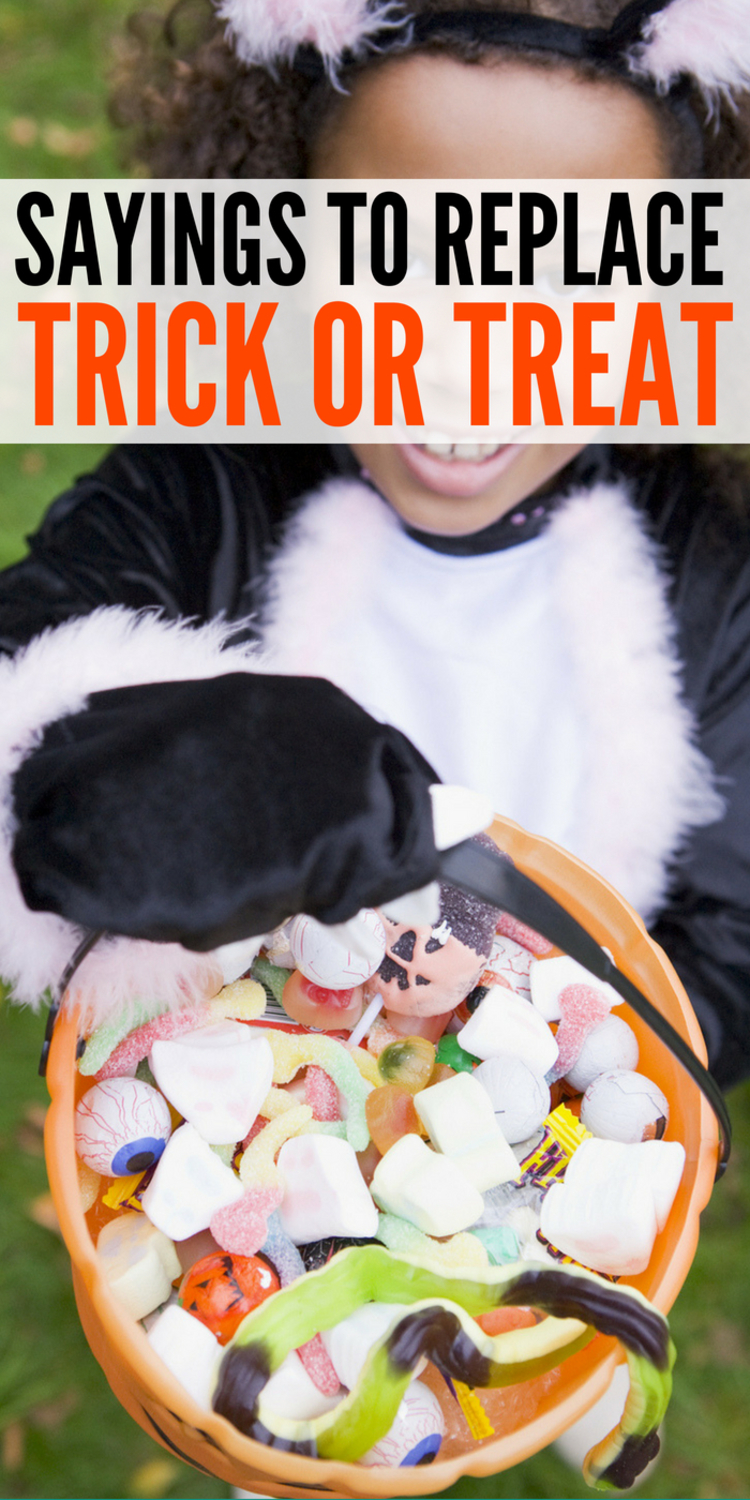 1. Happy Halloween! Snack for my sack?

Who doesn’t love an adorable Halloween rhyme? With this silly saying, your little one will probably get a ton of snacks to put in their Halloween snack for later! We can agree that this rhyme guides the message home in an adorable way. Foremost, it passes Halloween wishes to the treat giver, which creates a rapport based on the fact that rhymes have the ability to trigger emotions. As mentioned, it ends with a rhyme that is sweet to the ears and soothing to the heart.

2. Looks like you have a lot of candy, let me help lighten your load.

This funny trick should work well! If they want more candy, all they gotta do is ask for it. (And while it may not work, it’s still a fun saying to bring a little variance to the night!). Expectedly, the most feasible way to lighten the candy load from the giver is to transfer some to your basket. I think this phrase is good because it communicates good intention while making the request for some treats. It’s also specific to candy, which is core to the Halloween celebrations. 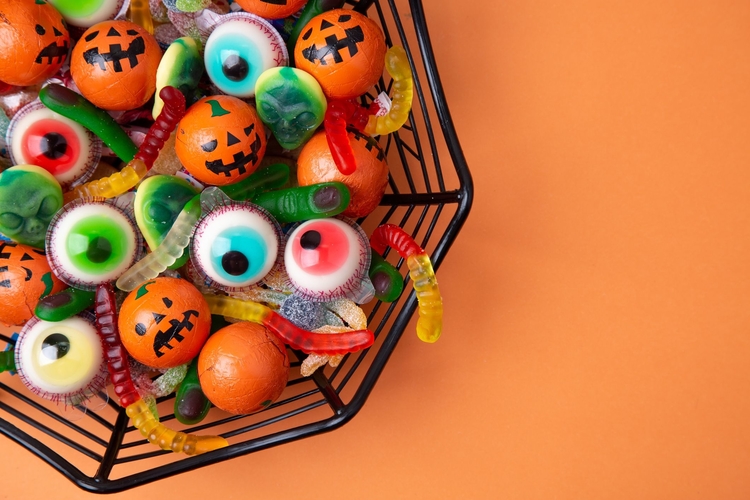 3. I’ve got the Halloween tummy grumbles. Can you help?

No adult can deny a hungry child treats, right? They’ll probably give them a bit extra as well to give them enough energy to get through the night! From the adage, no one will ask their father for bread and get stones instead. While the treaters may not be your biological father/mother, it is almost inevitable that they will heed the request to offer help.

4. Ghosts, witches, or goblins – If you don’t have any treats we’re gonna have some problems.

Only a child dressed in an adorable costume can pull this one-off. Adults…you can try, but it won’t have the same effect. Personally, this would sweep me off my feet because I would find it as hilarious as those dark jokes we all know. Knowing that some children may be fearful of the scary costumes that are all over during Halloween, finding one that fits the character is attractive. 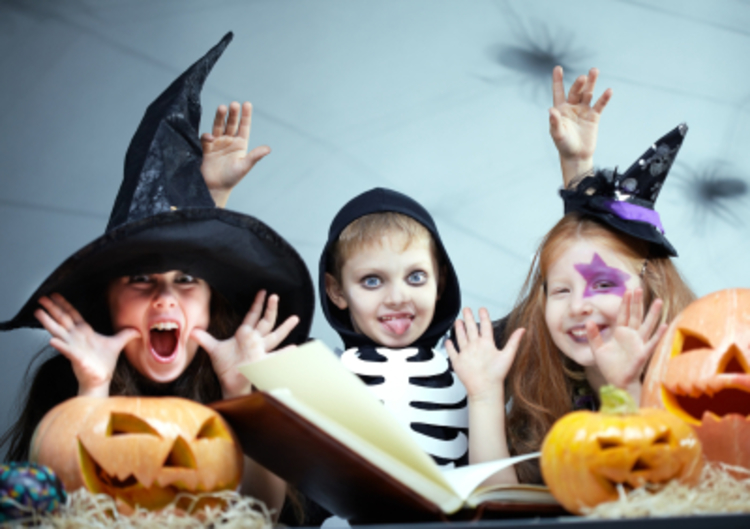 5. You look quite beautiful tonight.

Compliments always work, right?! Typically, yes. On Halloween night, you’ll have to try it to find out. This works because of the basic law of nature that “what goes around, comes around“. Even though it is expected that when one gives a compliment, they are likely to get one in return, in this case, you may just get a treat in return. Just in case you don’t find a good reason to throw a compliment, please remember that compliments are free.

6. Looks like I’m the last kid on the street…I’ve got more than enough room for the remainder of that bowl.

If they don’t ask, they’ll never know. The worst that can happen is that they get one piece of candy and the best possible outcome? The entire bowl. Personally, I find this a polite way to express more than what you could have got. Despite being assertive, it has less chance of rubbing off with the treat giver negatively. As mentioned, the worst-case scenario is walking off with only one candy as you would have even without using this saying. If you ask me, it makes the extortion part of Halloween fun. 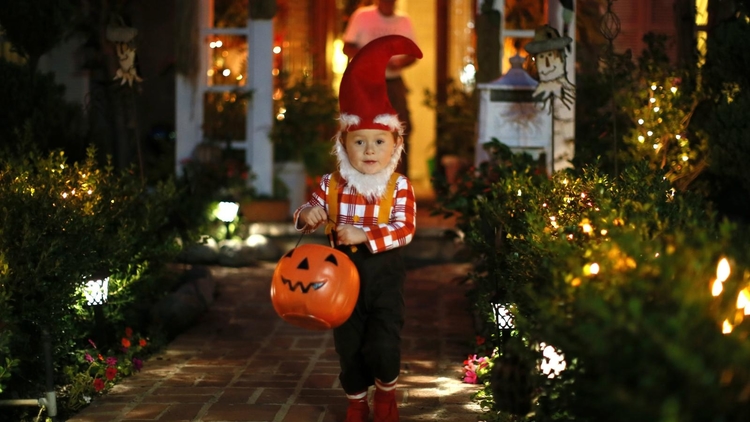 An adult working in paying off the “man” is never done. For the treaters that require a joke before handing out their treats, this one is bound to get them. Picture a short man or woman at your doorstep appealing to you to pay your dues, I find that hilarious. It’s like waking up one day and run into your child demanding that you pay rent to him for living in your house.

Just a little variance on the classic can be fun, too! We can agree that this dismisses the possibility that the treater would interpret the appeal for cookies and treats as a threat as compared to “trick or treat”. With the variance created, this saying is likely to soothe the treater’s heart, because of the politeness it imposes, and you could be enjoying the benefits of this in the form of increased threats. 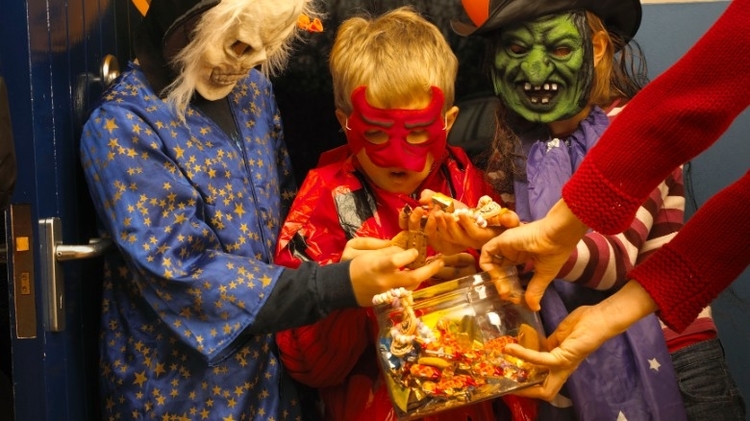 And if your little one throws in some puppy dog eyes here and there, a lot is what they’re going to get! I find the statement assertive and clear in its expression. Despite the fact that we have constantly fought extortion as part of Halloween, I think this kind of extortion is allowed. Different from the extortion imposed by the ‘treat or trick’ phrase, this one does not highlight a threat. Instead, it extorts on the basis of willingness rather than a threat.

10. My energy is level is low, but chocolate should do the trick!

A more true statement has never been saying. With all the walking and knocking that you’ll be doing on Halloween night, energy and snacks are going to be much needed! Considering chocolates are among the DIY treats most people make in preparation for the event, mentioning them communicates that their effort is noticed and they will be glad to give for that very reason.

Trick or treating is such a fun time, that incorporating a few of these silly phrases will add even more fun to the night. And if you don’t like any of these, why not let your little ones make up their own? They’ll love being able to think up wild and wacky sayings to catch everyone off guard. 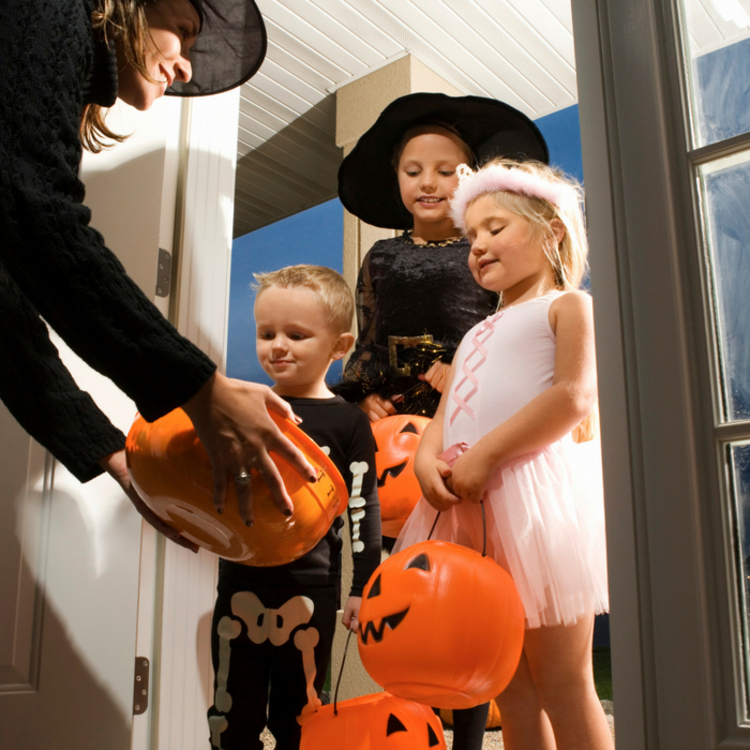 “When the spooks have a midnight jamboree/They break it up with fiendish glee/The ghosts are bad but the one that’s cursed/Is the headless horseman; he’s the worst/That’s right, he’s a fright on Halloween night! When he goes a jogging’ ‘cross the land/Holding his noggin in his hand/Demons take one look and groan/And they hit the road to parts unknown/Beware, take care he rides alone!”

From “The Headless Horseman,” The Legend of Sleepy Hollow (1949)

What sayings do your kiddo’s say when trick or treating?

On the other hand, you may have failed to notice but different scholars consider the phrase “trick or treat” to be expressive of the extortion side of Halloween. Consequently, the use of friendlier sayings alleviates that undesirable side of Halloween. In case you don’t know, the saying “trick or treat” imposes a threat in the sense that the treater is expected to give a treat or fall victim to pranks and other tricks.

Looking at it closely, extortion is not necessary if the end goal is to get as many sweets as possible. Instead, they use of strategy is important in all ways that the situation can be thought of and extortion is not a recommendable strategy. Using the suggested alternative sayings is one of the recommendable strategies. Additionally, children can use the economic strategy in the development of their treat collection route and plan.

Above all, tricking or treating during Halloween calls for the need for etiquette, which is necessary to maintain good relations. The rules cut across the givers and the recipients. For the trick or treaters, it is important that they be polite and respectful, avoid being greedy, and have fun showing their costumes because it is a major part of the event.

On the other hand, those giving candies should be accommodative because of the nature of their guest. Also, they should avoid being too scary, even though it is part of the fun on the occasion. Finally, it is important to send the right signals to the kids with a good example being that you should not welcome tricks when you don’t have any treats to give.

Enjoyed the above read surrounding Halloween, here are others you could enjoy:

So, which of these clever funny sayings replacing trick or treat did the kids try out? Let us know in the comments!