Since Scout Elves can’t actually talk, the best way for them to talk to your kids is with a letter. And, your kids will probably want to write letters back, or send one along to the North Pole for Santa! I’ve rounded up some great ideas for Elf on the Shelf letters to keep the fun going all season long!

Now that the Christmas season is upon us, it’s time to gear up for Elf on the Shelf! This magical tradition provides endless opportunities for fun and interactive activities for the whole family.

Looking for ideas to introduce your new Scout Elf, or welcome a returning one back for another year? Wanting to find creative ways to send your kids’ messages to the North Pole via Elf courier? How should you tackle the sad task of saying goodbye for the season – or even for good?

Don’t you worry – I’ll cover all that and more. Here are some clever and unique ideas for every Elf communication need imaginable.

What Is Elf On The Shelf?

Elf on the Shelf started out in 2005 as a children’s book, The Elf on the Shelf: A Christmas Tradition by Carol Aebersold and her daughter Chanda Bell. Essentially, Santa sends out Scout Elves to hide out in homes across the country to keep an eye on children. You know, to tell him who’s been naughty and who’s been nice.

Every night, they whiz back to the North Pole to report their observations.

Before dawn, the elves resume their posting, and have to stop whatever they’re doing before a child sees them. For this reason, they’re often found in a different place every morning (sometimes caught in the act of something silly or mischievous!).

While this tradition can be a lot of fun for parents and children alike, it often requires a lot of behind the scenes work. That’s why an Elf on the Shelf planning calendar can come in handy.

Types Of Elf On The Shelf Letters

You’re probably familiar with letters to Santa. Why would you need to send letters to Elf on the Shelf? And how can your Scout Elf introduce themself or say goodbye to your child?

There are a few ways to spin this, and each one of them is a ton of fun. You can get creative by combining a few of these ideas, or keep it simple. Here are a few types of Elf on the Shelf letters you can integrate into your Scout Elf tradition.

Without further ado, let’s dive in to some great Elf on the Shelf letter ideas you can use this season!

Introduction Letter For Elf On The Shelf

If you had to pick one type of letter to write, this would probably be it. An introduction letter is typically addressed to your child, either from the Scout Elf, or perhaps from Santa. The basic purpose is to introduce your child to her new friend, announce your Scout Elf’s name and explain why this itty bitty creature will be staying a while (unless your child has already read the book).

Here are some great printable introduction letters and ideas for welcoming your Scout Elf to the family.

This beautiful, traditionally-themed free printable letter is from Santa, introducing your new, flighty friend and explaining the rules (as in, never touch an elf!). In addition, Spaceships and Laserbeams has several great ideas for welcoming your new Elf on the Shelf.

5 Awesome Downloadable Elf on the Shelf Letters, Ideas and Templates for 2019
Say hello and welcome to your elf on the shelf!
Read more here. 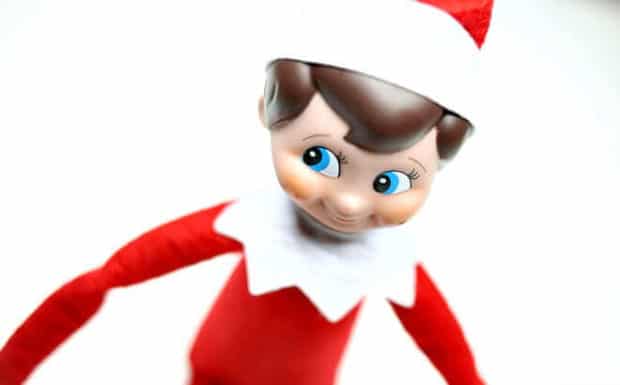 These classic hello and goodbye letters from I Heart Naptime are very cute and quintessentially Christmas. They’re written from your Scout Elf to your child and there’s also a space to sign their own name.

FREE Printable Hello Goodbye Elf on the Shelf Letters – I Heart Naptime
Free printable arrival and goodbye letters from your elf! Make the most of this holiday season with these adorable and personalized elf letters.
Read more here. 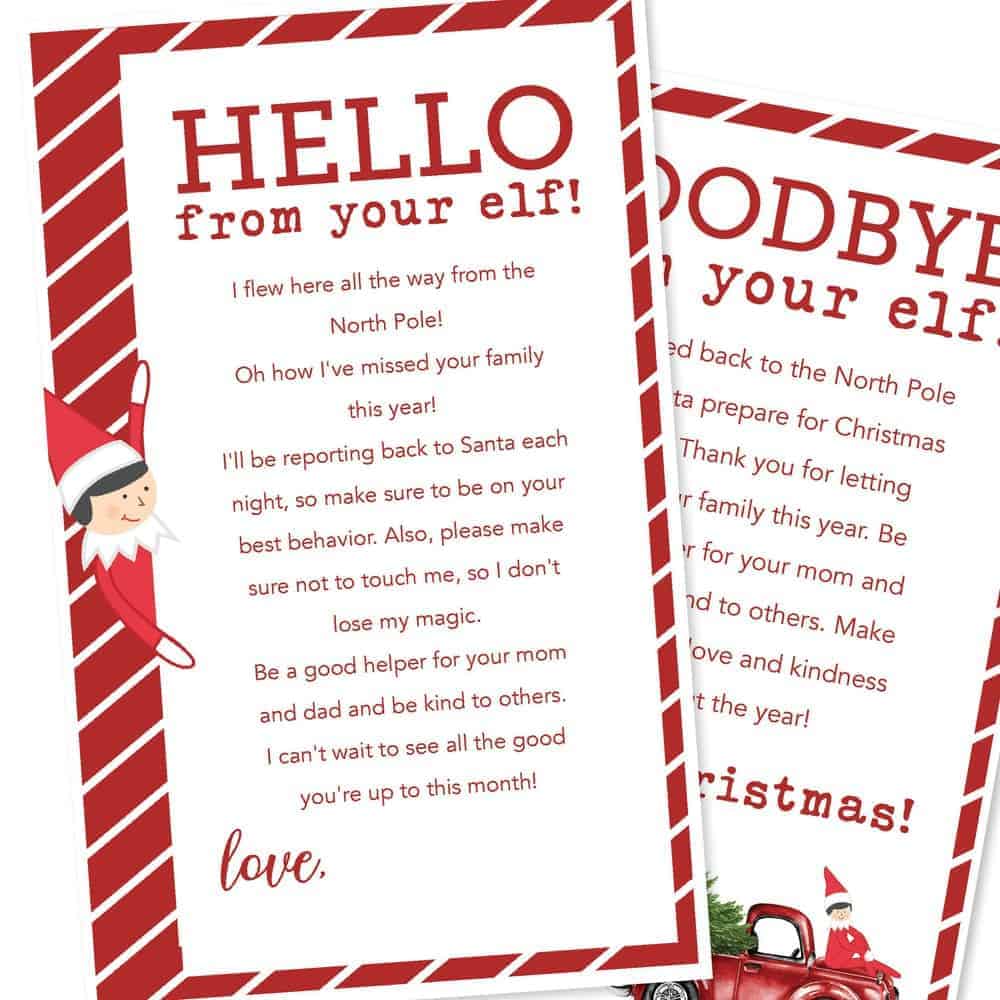 You’re sure to find a style you like from this great list of 10 free printable Elf arrival letters on Letters from Santa Blog!

Most of these are letters from your Scout Elf, but there’s also a handy “Christmas Contract” for your child to sign, promising to be good and not touch the elf this season!

Elf on the Shelf Ideas for Arrival: 10 Free Printables! | Letters from Santa Blog
Elf on the Shelf ideas for their arrival from the North Pole this Christmas! 10 Free Elf on the Shelf printable arrival letters a Christmas contract- all of them cute as can be!
Read more here. 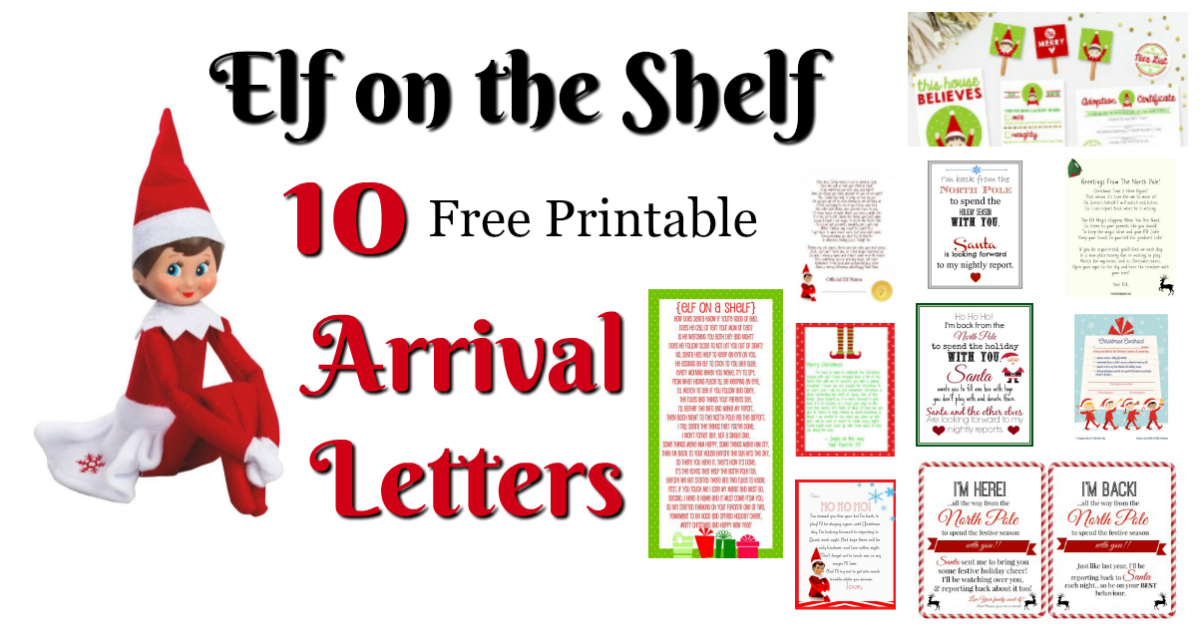 Return Letter To Elf On The Shelf

If your family has done Elf on the Shelf before, this is basically a welcome back letter. Here are some return letters from your favorite Scout Elf after a year-long absence!

I’ve Missed You This Year!

This sweet note from your Scout Elf will let your child know that his favorite Christmas friend is back to play, and remind him of the no-touching rule.

A return letter from your Scout Elf a very unusual Christmas, reminding your child how they can stay healthy this year!

Elf Quarantine Return Letter | The Elf on the Shelf
It’s the most wonderful time of the year for Scout Elves! They have been planning and preparing all year long for their daily hide-and-seek celebrations
Read more here. 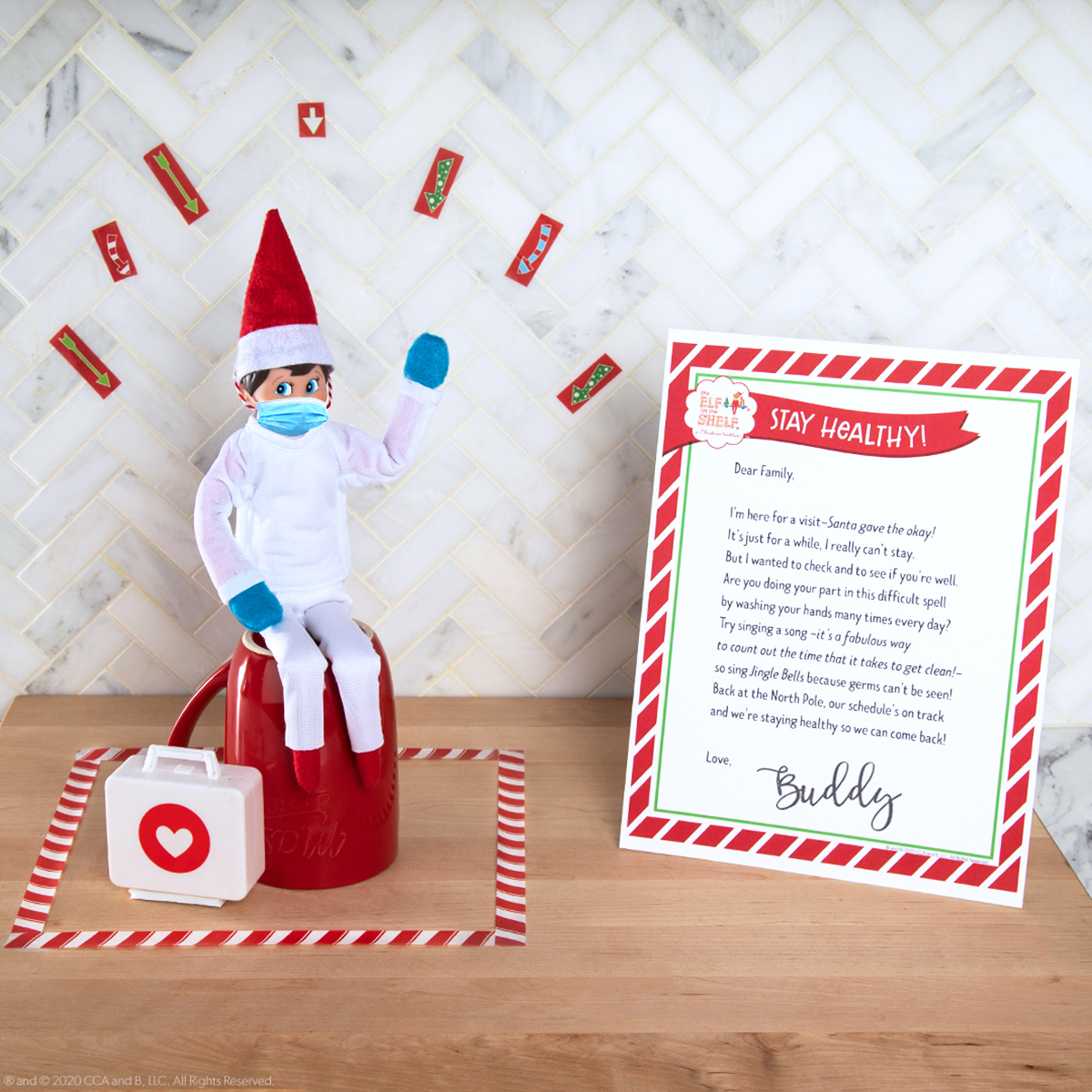 A huge list of super cute, full-color graphic arrival notes from I Think We Could Be Friends, such as “DONUT Worry, I’m Back!”

Elf On The Shelf Goodbye Letter

Pretty much self-explanatory, a goodbye letter from your Scout Elf bids children adieu after a successful Christmas season. However, it’s not a forever goodbye! Your tiny friend will return for another season of fun next year.

These fun and colorful printable letterheads will allow your Scout Elf to pen their own goodbye letter in their own handwriting. There are two design options available to download for free from the official Elf on the Shelf website.

Farewell! | The Elf on the Shelf
Your elf is hoping to wish you a final fond farewell with a departure letter just for little ones! Using this free printable stationery, your elf may write your family a letter saying goodbye.
Read more here.

Saying Goodbye to Your Elf

A list of clever ideas for saying goodbye to your Scout Elf for the season, for kids (and parents) who want to go beyond the traditional letter. 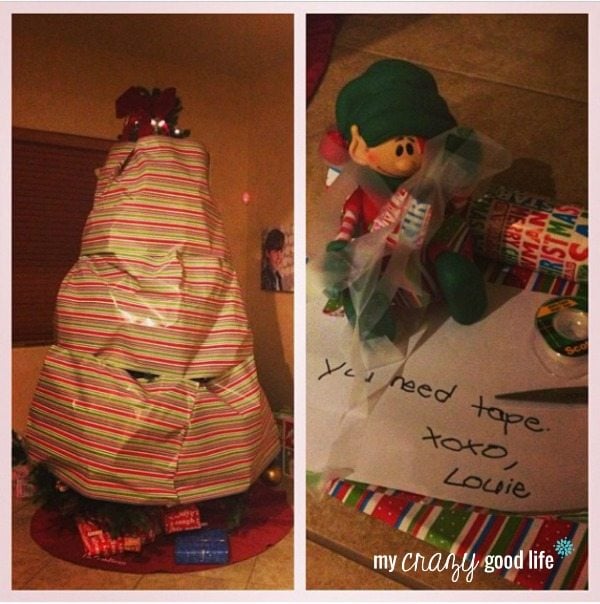 Looking For Something More Traditional?

Spaceships and Laserbeams created this beautiful, traditionally-themed letter from Your Elf on the Shelf, reflecting on the fun times they shared with your child this season and explaining that they’ve been called back to duty by “The Big Guy.”

Elf on the Shelf Retirement Letter

If you sense your child growing out of the Elf on the Shelf tradition (or if you’ve simply had enough! 😂), this is a gentle and thoughtful way to bow out.

It’s basically a letter from your Scout Elf explaining that your child has done so well, they get to “graduate” from being watched, and your Elf is now free to move on to duties elsewhere. It also gives kids permission to finally touch and play with their Elf toy.

This free printable from The Happier Homemaker makes the retirement process smooth and easy. With the Department of Elf Management stamp on the top, it also looks super serious and official!

Elf on the Shelf Printables
Whether you are looking for funny nightly ideas for where to move your elf or ready to retire it from service, these printables have you covered!
Read more here. 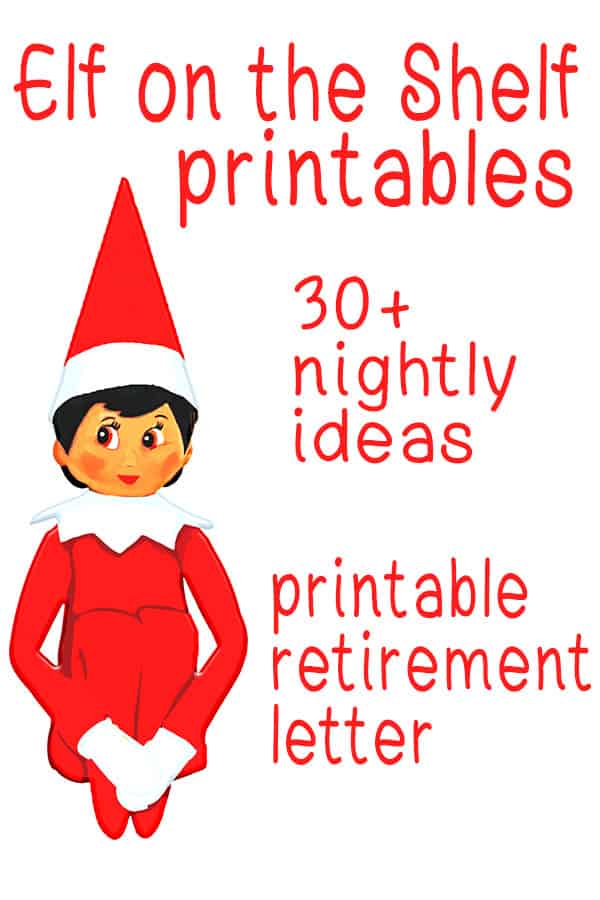 Letters To Elf On The Shelf (From Your Child)

Here are some special and creative ways for your kids to get a message to their Scout Elf, or send a letter to Santa along with their little friend before their nightly trip to the North Pole.

Here are some ways for your child to communicate with their Elf on the Shelf.

4 Ways To Talk To Your Scout Elf

The official Elf on the Shelf site provides four ways to talk to your scout elf: send snail mail (with a real postal address provided), message on the social media channel of choice, send a virtual cookie (yum!), or even eMessage in your child’s own virtual portal!

How Can I Talk to My Scout Elf? | The Elf on the Shelf
Now that Santa’s Scout Elves have returned to the North Pole, your kids may be wondering how they can still get a message to your family’s friendly helper. Luckily, there are several easy ways to get in touch with the North Pole if your child is missing their Scout Elf.
Read more here. 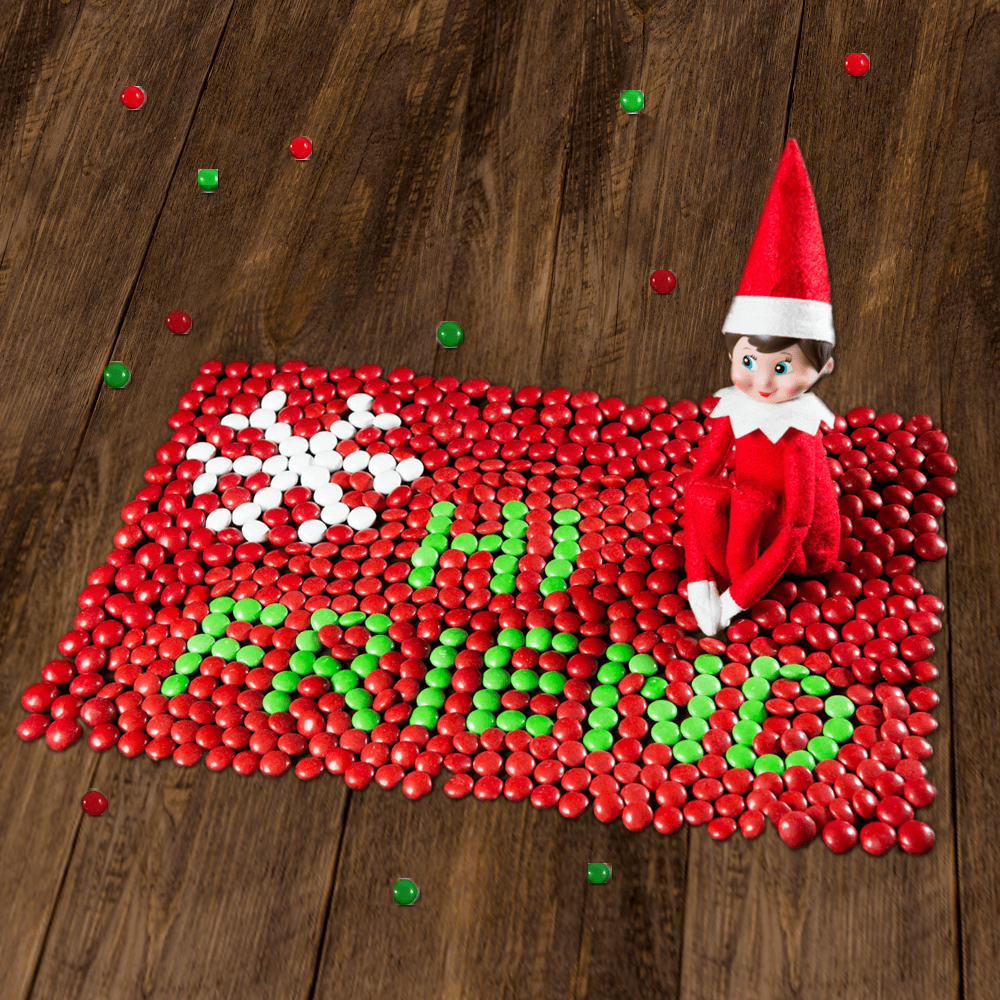 Letter Shrinking Kits To Send To Your Elf

With these kits, you can shrink your child’s letters to Elf size for quick delivery to the North Pole! Once you send Santa a letter, he will read and return it with your Scout Elf, where it can hang on the tree as a keepsake ornament.

Letters To Santa With A Shrinking Kit | The Elf on the Shelf
The speediest delivery service to Santa is here! Santa has enlisted the help of his Scout Elves to fly messages to him at
Read more here. 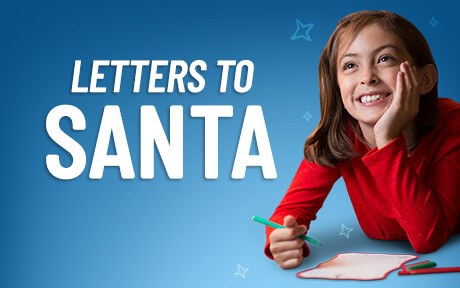 Here’s a video to show you how it works!

And, there you have it – all the different ways to implement letters to Elf on the Shelf and have even more fun with this yearly tradition!

More Posts About The Holiday Season